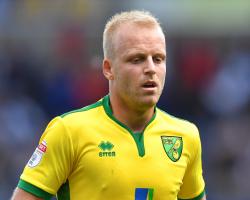 The Scotland forward could not have written a better script for his return to Goodison Park in Tuesday's EFL Cup third-round tie.

Naismith was applauded by all sides of the ground when the teams were announced and, more remarkably, again after he scored the opening goal for Norwich, who won the game 2-0.

The 30-year-old left Everton in January after three-and-a-half years in which he scored 25 goals in 123 appearances.

Naismith was stunned by the welcome he received, saying: "I can't think of many times I've seen it with anybody else

Coming back you see so many friends that are now friends forever.

That's what the club's about and the people here are special.

"It was a fantastic night all round for myself

I wasn't going to celebrate obviously but for them to start clapping, it was a special touch.

I've got some great memories and it just shows the bond that I had with them."

Norwich paid ÃÂ£8.5million for Naismith but, after scoring on his debut, he did not find the net again all of last season as the Canaries were relegated.

The forward netted on the opening day of this season but he has not been in the squad since a potential loan move to Sunderland fell through on transfer-deadline day.

The cup offered him a chance back in, with Neil making 10 changes.

Naismith admitted to being bemused by his absence and revealed Neil has not given him any explanation.

When asked about the issue, the Norwich manager cited the impressive performances of the players who have been in the team, with the Canaries winning three successive Championship matches.

Naismith said: "I think everybody (who came in against Everton) maybe feels slightly hard done by.

"It was a bit of a shock to myself to not be involved but that's football and you've got to get on with it and keep working hard, and that's what I'll do

I can't really do any more than I have been."

The second goal was scored by 21-year-old Josh Murphy and was the stand-out moment of the game.

The winger picked up the ball on the right of the area and beat two players before curling an unstoppable shot into the top corner.

That made it four goals each this season for Murphy and his twin brother Jacob, who have both been at the club for 10 years.

Jacob has had more first-team chances so far but Josh insisted there is no jealousy.

He said: "We're always going to be proud and happy for each other

The aim is to both be starting.

"There's never been a rivalry

He's doing well and it was down to me here.

"It's a great place to stake your claim

The manager said how hard it's going to be to pick a starting XI because all the boys were excellent."

The Murphys have been approached by the Republic of Ireland but Josh does not think they qualify and, after representing England at under-18, under-19 and under-20 level, he has set his sights on further honours.

He said of Ireland: "There's been enquiries but I doubt we can play

As long as we're doing well and we keep getting better and better, there's no reason we can't do that."