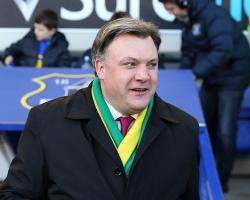 Balls, the former shadow chancellor who lost his constituency seat in Morley & Outwood during the General Election in May, was officially unveiled by the club on Monday

"We've now been in the Premier League for four years out of five, but I don't think anybody yet feels our long-term future as a Premier League club is secure, that's work which we still need to do," he said

"There is a real sense of purpose and strategy, the club is thinking about the next transfer window and the one after, and how we make sure that we secure ourselves commercially and financially.

"I never thought when I was six years old that I would be back here as the chair of what is known, certainly in the club, as the best football club in the world

Everybody knows it's a brilliantly well-run community club

"I hope I can help in the transformation of the club, which is ongoing

I've been a supporter here for 40 years, and we've always been an up-and-down club."

One of Balls' immediate tasks will be to oversee the January transfer window, but chief executive David McNally explained that Norwich are already prepared for the coming weeks and that they imminently expect to sign a new player.

"In the short term, as far as the transfer window is concerned, there is no change," he said.

"Clearly Ed will be actively involved in discussions, but we aim to improve the squad every transfer window

"We've already made a start in that respect, with the permanent signing of Matt Jarvis, and we've been very active over the last few days so that we can hopefully bring someone in early in the window to help the current group.

"We've got arguably the best squad in our history so we need to bring in players who can improve upon the existing roster, and that's hard, that's the challenge."

I've known Ed's family for years, the passion for me is the number one.